The official site of The Campbell Real Estate Timing Letter

Has the Inflation Spiral Begun? 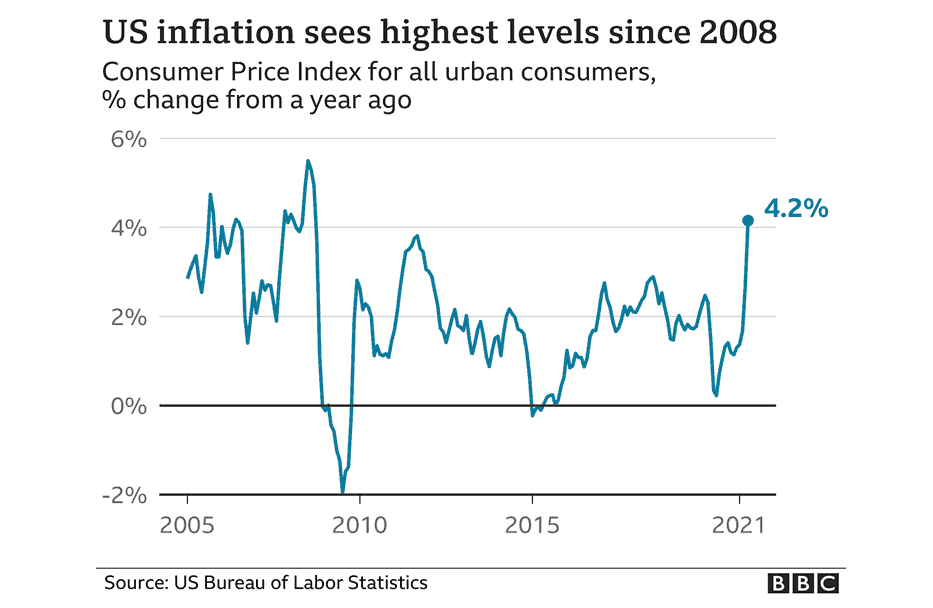 Inflation measures the rate at which the prices for goods and services increase — and the US Labor Department reported that consumer prices jumped to 4.2% in April – the biggest year-over-year increase since September 2008.

One-third of the overall increase was the result of used car prices that climbed by 10% in April alone – the greatest monthly increase since records began.

The Fed, however, believes at least part of the acceleration in inflation will be transitory because of supply chain disruptions that were due to Covid-19 restrictions.

It believes inflation will cool back down in 2022 when the economy is fully open again.

Even though the Fed is printing money like there is no tomorrow, what would you expect the Fed to say?

Price Inflation is Running Hotter than 4.2% Per Year

Nationally, the CoreLogic Home Price Index increased 11.3% annual rate in March – up from 10.4% in February.  As I illustrated in the May 2021 issue of my Timing Letter, YOY price growth has increased for the last 10 straight months.

Building materials – which are prices paid for goods used in residential construction less food and energy – increased 12.4% year-over-year in April, according to the May Producer Price Index (PPI) report released by the Bureau of Labor Statistics.  This has added $35,000 to the cost of a newly built home.

McDonald’s also announced that it is increasing hourly wages by an average of 10% in May.

The Purchasing Power of Your Money is What Matters

Consumer price inflation is the politically correct way to say the U.S. dollar is losing value – which is why you have to factor inflation out of your investment returns.

If you’re making 10% per year on your real estate investments – and inflation is running at 10% per year – you may think you are making a killing but all you are really doing is keeping up with inflation.

Ex-inflation, your return is zero for that year.